Engineers Claim To Be Able To Make Gas From Air

Posted on October 19, 2012 by StevenTorresRamos 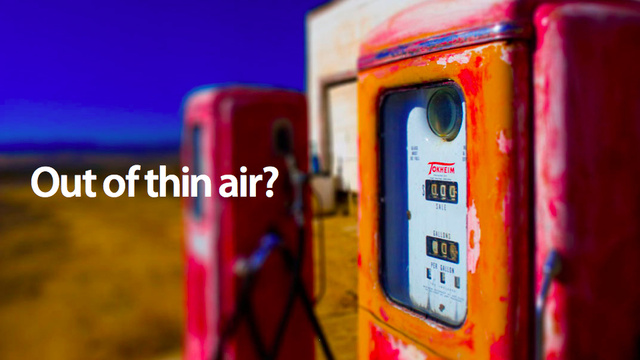 Hidden away in sleepy northern England is an engineering company with a radical idea: it claims to be able to make gas, to run your car, out of air. Is this the solution to the global fuel crisis, or wild hyperbole?The company, called Air Fuel Synthesis, revealed its research at a London-based engineering conference this week, claiming that not only can it make gas from air, but that it actually removes carbon dioxide from the atmosphere, too. It sounds miraculous.So, how do they claim to be able to do it? First, apparently, they take sodium hydroxide and mix it with carbon dioxide from the atmosphere. That produces sodium carbonate, which can then be electrolyzed to form purer carbon dioxide. The CO2 is then combined with hydrogen—produced by electrolyzing water vapor captured with a dehumidifier—to produce methanol. Finally, that methanol is passed through a gasoline fuel reactor—which uses some nifty organic chemistry once developed by Mobil—to create… gas!

via Engineers Claim To Be Able To Make Gas From Air.

https://steventorresramos.com/about-my-blog/
View all posts by StevenTorresRamos →
This entry was posted in Breaking News, Hacking, Interesting, Science. Bookmark the permalink.