Posted on October 23, 2012 by StevenTorresRamos 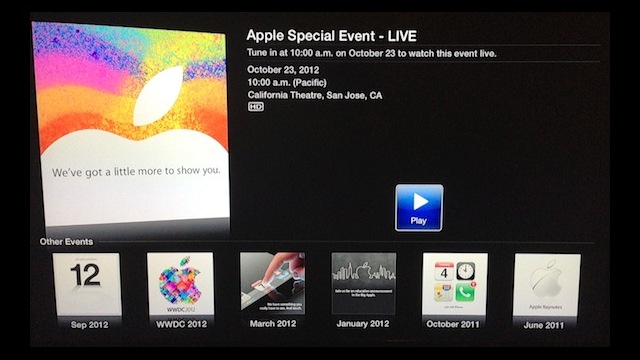 For those eager to hear what Tim Cook has to announce later on, good news: today’s Apple event will be streamed live, direct to Apple TVs.

Apple TV owners should see a new “Apple Events” icon on their homescreen. Click that, and there’s a page offering up the stream from 10am PT. It will be the first time Apple has officially streamed its own event since since 2010.

Currently there’s no word if the stream will be available elsewhere.

Update: BGR is reporting that the stream will be available on all iOS devices.  in Safari on an iPhone, iPad or iPod touch.

via Todays Apple Event Will Be Streamed Live to Apple TVs All iOS Devices.