Posted on January 23, 2014 by StevenTorresRamos 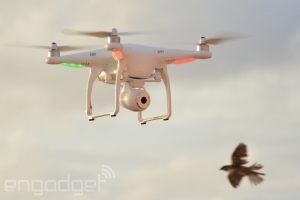 You may not have come across DJI before, but this brand is no stranger in the world of hobbyist drones. Even production studios use the company\’s gear for aerial videography, but that involves a lot more money than the average consumer can stomach — DJI\’s three-axis camera gimbal alone can cost up to $3,500, on top of about $3,000 for its latest six-rotor aircraft. And this is before you include a camera plus a remote control. Fortunately, we now have a more affordable option that still comes with camera stabilization: the Phantom 2 Vision.With a $1,199 price tag, this all-in-one package is aimed at prosumers who are looking for something more serious than, say, Parrot\’s AR.Drone series. While the latter\’s designed for entertainment, the Phantom 2 Vision gives you a taste of the advanced maneuverability and camera features from DJI\’s pro-level products. The relatively light 1.16kg drone features a built-in 14-megapixel camera with a 1/2.3-inch sensor, which is mounted on a tilt-axis gimbal under the belly. The only bits that need to be installed are the four self-tightening propellers, along with a swappable 57.72Wh battery that lasts up to 25 minutes but takes from one to two hours to fully charge when depleted.

via DJI’s Phantom 2 Vision takes a stabilized camera to the sky, we go hands-on video.

https://steventorresramos.com/about-my-blog/
View all posts by StevenTorresRamos →
This entry was posted in Android, Apps, HowTo, Interesting, iOS, Tech. Bookmark the permalink.