Posted on April 28, 2015 by StevenTorresRamos 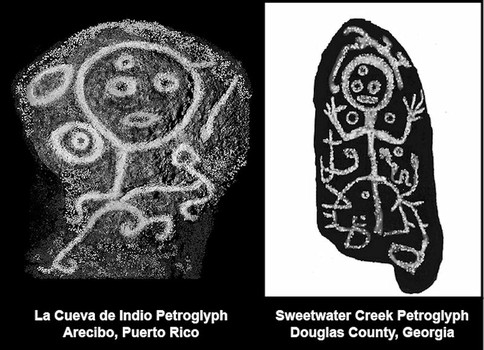 ¿Como? ¿Puertorriqueños en América del Norte antes de que Cristóbal Colón? ¡Por seguro! Forensic geologists and Native American scholars are opening the flood gates of new knowledge about North America’s past. What they are discovering is that what is now the Southeastern United States was a melting pot for at least 1000 years. Much of the proof has also been available for a long time . . . 16th century archives left by French and Spanish explorers, plus a stone tablet discovered over century ago near Atlanta, GA. The Taino ethnic and place names were in these old texts. Some of them are still in use today. Until recently, though, no one ever stopped to investigate the origins of such words that were within what was thought to be the original territory of the Creek Indians, but not Creek Indian words.

https://steventorresramos.com/about-my-blog/
View all posts by StevenTorresRamos →
This entry was posted in History, Interesting, PR. Bookmark the permalink.