Posted on June 1, 2016 by StevenTorresRamos 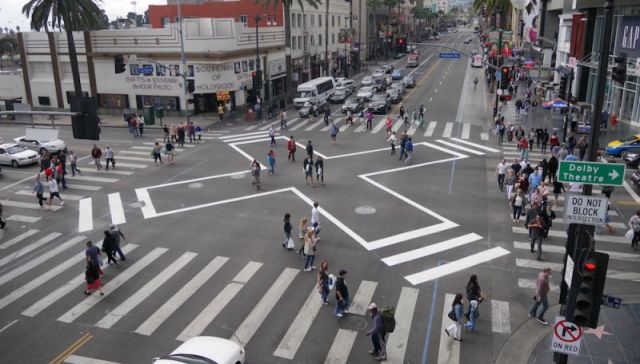 The intersection of Hollywood Boulevard and Highland Avenue is among the world’s most famous—you’ve seen it broadcast every year on the Oscars as the start of the red carpet. But like most celebrities, the tourist-thronged Los Angeles landmark had a very dark secret: It was known as one of the most dangerous intersections for pedestrians in LA. That all changed six months ago.

Late last year, after the alarming news that pedestrian deaths were skyrocketing nationwide, several reports investigated Los Angeles’ most dangerous places to walk. Topping nearly every list was Hollywood and Highland, which is not just one of LA’s busiest for both people and cars, but also a place filled with people who are simply not paying attention—on both sides of the windshield. Not to mention the fact that the sidewalks are sometimes so crowded that people have no choice but to walk in the street.

READ ENTIRE STORY HERE: A Simple Change Transformed One of LA’s Busiest Intersections Into One of its Safest