Posted on September 26, 2016 by StevenTorresRamos 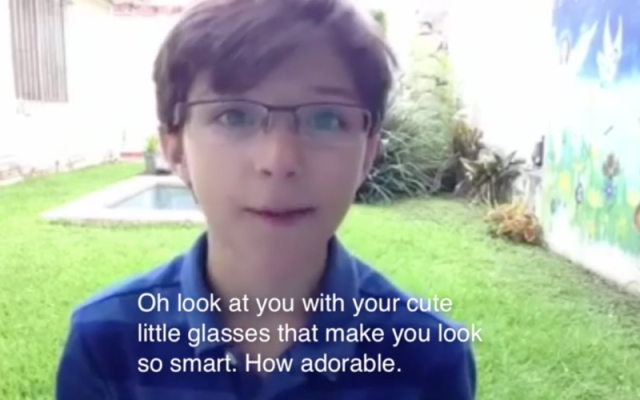 The anti-vaccine movement has met its newest foe, and it is a 12-year-old boy who loves lizards. Several anti-vax organizations have been pooling their collective intellectual powers for weeks to try to debunk, discredit, or “unmask” Marco Arturo, a budding scientist who made a viral Facebook video about vaccines. Also, he’s a child. They’re attacking a child.

Arturo lives in northern Mexico with his family; he had a surprise smash hit with a video he posted on May 24 called “Vaccines DO cause autism,” where he unfurled a folder filled with the evidence. The folder is full of empty white pages, because vaccines don’t cause autism.

The video went wildly viral after Ashton Kutcher shared it; outlets like BuzzFeed even went and made it into a picture book version for the portion of their readership who are less intelligent than a very smart 12-year-old. It’s now been viewed 7.6 million times and been shared more than 92,000 times.

The video’s success caused immediate, ongoing and intense consternation for various anti-vaccination folks, who within days, had massed on the video’s comments to tell the child that he was wrong, a shill, or a puppet for his parents.

“Kid,” wrote one. “Your [sic] not a doctor…sorry to tell you, but not everything you hear on the Internet is true.”

Arturo responded to a few of the comments, even the ones calling him an “embarrassingly stupid little twit.” He denied that he’d been given a script by his parents or Big Pharma. He defended his video. And then, because he is 12, in the following days, he moved on, posting an enthused photo of his pet lizards and goofy selfies in an Einstein wig. He also did a brief email interview with the Today show, explaining he’d been into science since his grandma started reading him books about it when he was a toddler. (I messaged Arturo on Facebook, asking if he would get permission from his parents for me to interview him. He said he would talk to them, and then didn’t get back to me. Because he is 12.)

In the meantime, as the science blog Respectful Insolence noted last week, the doxxing and “unmasking” efforts began in earnest. Let’s remember that this is, again, in response to a Facebook video made by a 12-year-old, in his backyard.

But a virulent portion of the anti-vax movement is, as we wrote last year,comfortable harassing, threatening, and revealing the personal information of people they disagree with. That evidently extends to children; a blogger named Levi Quackenboss wrote two posts speculating that Arturo is “a hoax” and “a little catfish,” a “pawn” of his parents and/or the pharmaceutical industry:

So people, you’re not interacting with Marco. You’re not reading Marco. Even in the video, you’re not truly listening to Marco. His parents have made him into a pawn. They tell him what to believe and what to say, then edited it to make him look like a debate genius. Marco, as you think you know him, does not exist. The only true Marco on Facebook is the one talking about his love of little green lizards.

In her next post, she strongly insinuated that she had discovered all sorts of things about his family:

So who is Marco? I’m not going to post his full name out of respect for him and his parents as well as their safety, but they’ve been a little sloppy about making trails to it so they should clean that up.

(I am not linking directly to Quackenboss’ blog because it purports to reveal private information about Arturo’s family.)

The main *gasp* huge reveal, according to Quackenboss’ deranged pseudo-investigative deep-dive, appears to be that Arturo’s stepfather might be a doctor. That would explain why Arturo is interested in science. It still wouldn’t be proof that vaccines secretly cause autism.

The following day, an anti-vaccination blogger named Forrest Maready at a site called My Incredible Opinion chimed in. (You have never heard of any of these people. It’s all right. Neither has anybody else). Maready made a video claiming “someone or something” with a lot of money was behind Arturo’s video. Which was shot in a backyard. Using blank pieces of paper as props.

Maready’s main point of upset is that Arturo’s video got lots of views, and suggested it’s because Ashton Kutcher’s A Plus website linked to it. He claimed A Plus wrote about it within four hours; in fact, Arturo’s video was posted on May 24, and wasn’t picked up by A Plus until May 27.

Maready was also disturbed by the fact that the A Plus post appeared to be sponsored by Walgreens. The article featured a logo that read “Promoted by Walgreens:”

Walgreens tells Jezebel they are indeed a “sponsor” on A Plus, but only in conjunction with a program called Vitamin Angels, which provides vitamins to people in developing countries. Here’s their statement to us, in full:

“We had no knowledge of, nor connection to the development of this video. Walgreens has been an advertiser on the website only in conjunction with the Vitamin Angels program, and again we were unaware of the video’s placement on our sponsored page.”

The Walgreens logo no longer appears on the A Plus story; our questions about when it was removed were not answered. (“We have no further comment,” a Walgreens spokeswoman finally told me, after a little gentle badgering.) Many vaccination opponents aren’t particularly happy with Walgreens to begin with; the company offers immunizations at many of its stores, including the MMR vaccine, which anti-vaccine proponents believe is the autism-causing one.

In the meantime, Arturo’s Facebook page continued to fill with insanity. Age of Autism, one of the biggest anti-vaccination blogs, chimed in, deeming Arturo a “PR hoax.” A blogger calling himself Curious Peacock made a rebuttal videofeaturing a heady mixture of trash talk about Marco’s glasses and personal appearance with screenshots of studies purportedly linking vaccines and autism. (At least 20 epidemiological studies have found no link between vaccines and autism; the only place where you will find “studies” claiming otherwise are on dodgy “natural health” websites.)

One of the underlying theories that’s emerging here is that Arturo was created as a puppet or a shill to oppose the movie Vaxxed, made by Andrew Wakefield,the former gastroenterologist who was the lead author on the now-debunked study linking vaccines and autism.

That’s right. Faced with an anti-vaccination documentary, Big Pharma pulled out its most powerful artillery: a 12-year-old boy standing in his backyard.

Things grew so bad this week that Arturo wrote a statement on his Facebook page, saracastically thanking Quackenboss for making him feel so smart:

Basically she is attempting to say that my parents must be the ones debating anti-vaxxers on the internet 24/7 because when she was my age she had no idea of what immunology was. I want to thank Levi in advance because she made me feel proud of myself by thinking that someone like me could not possibly exist. The “too good to be true” thing. Then she said that by reading my response and then reading your own journal from when you were my age, you could easily tell that I was not a child, but an adult because of the way I phrase sentences. Then she said that my parents didn’t manage to act like I was really twelve, which made it obvious that it wasn’t me.

I want to make something clear (but I know that y’all 9/11 truthers still won’t believe me anyway), and that’s the fact that no word that has been written by my page was written by anyone else other than me. Every comment, every post, I’ve written everything. Although, of course, other people help me admin the page for me, including my mother, who lets me monitor the page through her. However, as I said, I am the only content-provider. I love that you believe I’m an adult because of the way I write.

Arturo’s post also said outright that he’s on the spectrum himself, adding:

Imagine you were autistic. Just for a second, imagine you were autistic, and to see how many people stopped protecting their children against diseases because they’re too afraid to have a child like you. Now that, is a lot more hateful than my video, which was defending all autistic people. How would you feel, knowing that people would rather have a dying child than a child like you?

That’s why the whole scientific and autistic community is on my side. Because I’m defending their rights. Because I’m standing up for them. Or might I say, for us.

He also made a live video to demonstrate that he’s able to talk without his parents’ help.

“I’m getting abuse already,” he observed, five seconds after the broadcast began.

This is all an extraordinary bit of overkill in response to a video claiming vaccines are safe; it’s even more alarming to perpetrate against a child. But it is, apparently, the new normal for some sector of the anti-vaccination world, which views any disagreement as a dire existential threat. Even if it’s just a 12-year-old boy, standing in his backyard.

Source: Anti-Vax Activists Are Trying to Dox a 12-Year-Old Budding Scientist They Think Is a ‘Hoax’

https://steventorresramos.com/about-my-blog/
View all posts by StevenTorresRamos →
This entry was posted in Awareness, Interesting, News, Opinion. Bookmark the permalink.