Middle Earth: Why We Need to Turn Our Map on Its Side 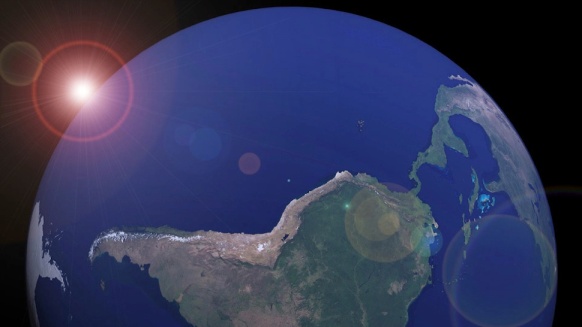 Though he never actually crossed it, the Greek mathematician Pythagoras is sometimes credited with having first conceived of the Equator, calculating its location on the Earth’s sphere more than four centuries before the birth of Christ. Aristotle, who never stepped over it either and knew nothing about the landscape surrounding it, pictured the equatorial region as a land so hot that no one could survive there: the ‘Torrid Zone’.Medieval Christian mapmakers, familiar only with a small corner of the planet, worked within strict horizons that were fixed by the Church’s interpretation of the Bible. Their Earth was flat. First created in the 7th century, the Christian orbis terrarum circle of the Earth maps, known for visual reasons as ‘T-and-O’ maps, included only the northern hemisphere.This medieval argument was still rumbling on when Columbus first sailed southwest from Spain to the ‘Indies’ in 1492. Columbus, who had seen sub-Saharans in Portuguese ports in west Africa, disagreed with the Church: he claimed that the Torrid Zone was ‘not uninhabitable’. Columbus’s eventual ‘discovery’ of America stretched the horizons of the European mind. The Equator was gradually reimagined: no longer the extreme limit of humanity, a geographical hell on Earth, it became simply the middle of the Earth.

via Middle Earth: Why We Need to Turn Our Map on Its Side.