Posted on September 26, 2013 by StevenTorresRamos 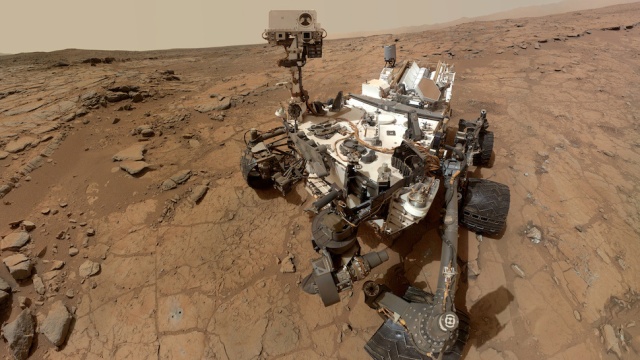 Just when you thought ol Curiosity was digging in for the winter, the little discovery machine came up with a doozy: It discovered water in Martian soil. NASA scientists just published five papers in Science detailing the experiments that led to the discovery. Thats right. Theres water on Mars.Impressive as it is, though, the discovery comes with some caveats. Its not like Curiosity stumbled on a lost lake under a mountain or a stream trickling across the landscape. Rather, it found water molecules bound to other minerals in Martian soil. Theres kind of a lot of it, too. Researchers say that every cubic foot of Martian soil contains about two pints of liquid water. All things told, about two percent of the Martian soil is made of up water.”We tend to think of Mars as this dry place—to find water fairly easy to get out of the soil at the surface was exciting to me,” Laurie Leshin, dean of science at the Rensselaer Polytechnic Institute, told The Guardian. She also explained how the discovery was made. Curiosity picked up and sieved a scoop of soil from the surface before dropping it into an on-board oven. “We heat [the soil] up to 835C and drive off all the volatiles and measure them,” she said. “We have a very sensitive way to sniff those and we can detect the water and other things that are released.”  [click below for more…]

https://steventorresramos.com/about-my-blog/
View all posts by StevenTorresRamos →
This entry was posted in Breaking News, Interesting, MARS, News, Science. Bookmark the permalink.